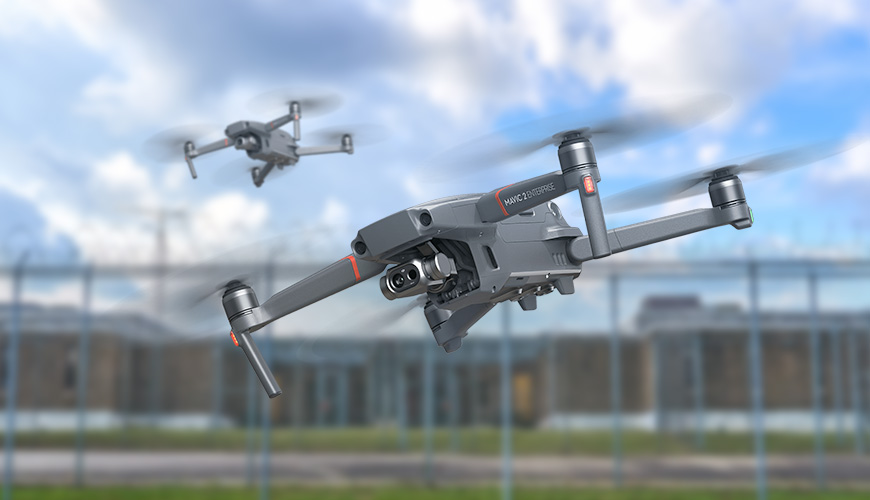 The FAA has banned the use of drones over or in close proximity to correctional facilities, but that doesn’t mean it isn’t happening – drones are being flown in these areas, both by the bad guys and the good guys.

It is unfortunately not uncommon for inmates to receive contraband from the outside world by drone drop-off, items such as cell phones, wire cutters or even guns and ammunition, that can often be used to aid in escapes. The drones used for these deliveries are operated by individuals up to a quarter of a mile away outside the correctional facility perimeter, making it difficult to pinpoint their precise location. But if the criminals and their abettors are using drone technology for their nefarious purposes, you can be sure that the very same technology can and is being used to combat them.

In 2017, South Carolina became the first state to implement a statewide program using drone technology to combat contraband deliveries to inmates of state prisons. In that year, there were 28 reported sightings of drones near correctional facilities. Prison officials determined it was time to put the same technology to good use. Drone detection sensors installed in the prisons are able to detect unauthorized tiny aircraft, and send the alert for a quickly deployable drone to initiate a perimeter search.

The drone can quickly get up to 400 ft over the facility, allowing the operators to see the entire institution. From there they can pan around the perimeter, looking for irregularities or suspicious activity. The drone can easily move closer to a location that needs further investigation, or use the camera capabilities to zoom in on a particular area.

The drones deployed for investigation need to make use of two types of camera – a visual camera and a thermal camera. The visual camera is essential for operators to identify individuals and potentially harmful or contraband items. But perhaps of even greater use is the thermal camera, which enables the drone operator to quickly spot the warm body of an intruder, or the recently dropped drugs or weapons. Ideally, the drone should have a dual visual and thermal camera mount, allowing these two critical functions to be utilized simultaneously.

An example of an ideal drone for work in correctional facilities is the Mavic 2 Enterprise Dual, with its dual visual and thermal camera mount. The thermal camera of the Mavic 2 Enterprise Dual has a 160×120 resolution sensor with a 57°HFOV, capturing the spectral band from 8-14 μm. The thermal resolution refers to the fine detail and clarity of the thermal image, or in other words, the number of pixels per unit of area. More pixels mean greater temperature measurement accuracy, particularly for small objects. In the video mode, the image size is 640×360 (considered to be high resolution), with a refresh rate of 8.7fps. This level of resolution and refresh rate is important in producing a high-quality, detailed image, an absolute essential in the work of prison surveillance and monitoring.

Several other features of the Mavic 2 Enterprise Dual make it a perfect fit for work in correctional facilities. One of these is the fact that the drone itself comes with a password protection mode. When Password Protection is enabled, the pilot must enter their password at each use. Password must be entered before the drone will link with the remote controller or enable access on-board storage, ensuring that access to the drone and its storage are secure even in the even of the drone being physically compromised.

Another key feature to mention is the GPS timestamping, which encodes the time, date and location of every recorded image taken by the visual camera. This ensures pilot accountability, and ensures that the data captured by the drone is trustworthy and reliable. This is especially relevant to work in prisons, as the captured footage has a high likelihood of being called for in potential legal proceedings.

The nature of work in prisons requires a heightened level of data security, and the Mavic 2 Enterprise Dual has an answer for this as well. Operators can make use of the Local Data Mode feature in the DJI Pilot App which, will stop the user’s connected mobile device from sending or receiving any data over the internet, providing an added level of assurance that the data being transmitted is secure.

In addition, the Mavic 2 Enterprise Dual features DJI’s most advanced video and data transmission system, the Ocusync 2.0. This system provides a stable connection between the drone and its remote controller, even in environments with high electromagnetic interference, as you can image would be a factor in a high-security area such as a correctional facility.

With a tool such as the Mavic 2 Enterprise Dual, security personnel in prisons are well-equipped to respond quickly to intrusions, whether it be from unauthorized drones, or packages thrown in over the wall. The ease of use makes the drone able to be quickly deployed to search the perimeter for the source of trouble. Or in the case of escapees, again, the functionality of such a drone as this makes it the perfect tool to quickly search and locate the perpetrator, as soon as the alarm is raised.